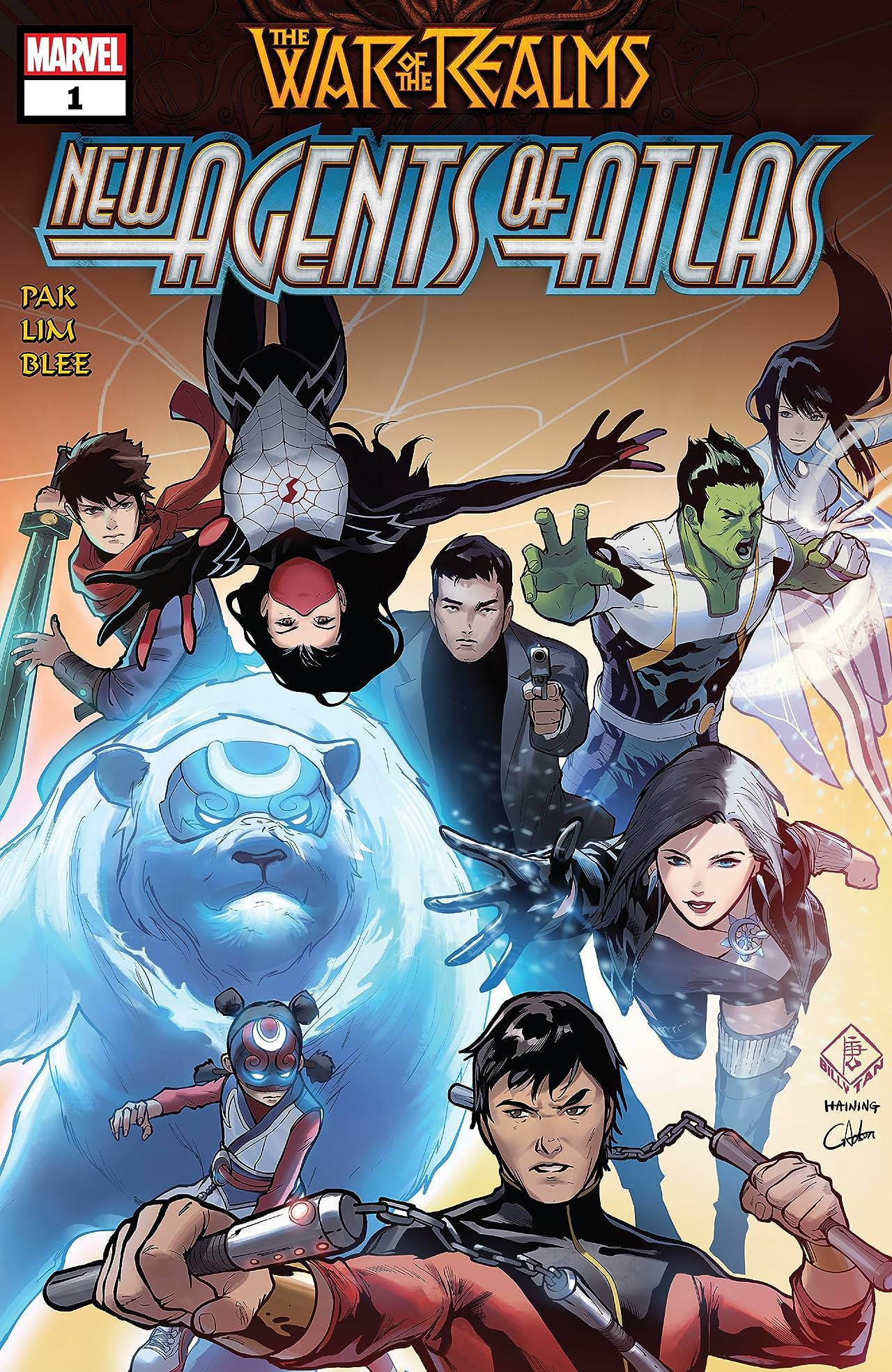 Title: The War of the Realms: New Agents of Atlas #1-3

Synopsis:  As Sindr, Immortal Queen of Muspelheim, and her legions of Fire Demons march on Asia, it’s time for a new band of heroes to unite to protect the Pacific Rim. Having brought together a ragtag team of heroes to defend the Earth from an alien invasion in the past, can Amadeus Cho reassemble his “protectors” — Shang-Chi, Silk and Jimmy Woo to save the world from incineration? And where is Kamala Khan? And just who are Crescent, Io and Luna Snow??? Featuring Marvel’s newest heroes from China, AERO and SWORD MASTER, and a mysterious new Filipino heroine named WAVE

Hello there allies, archenemies and, everyone in between! Today I’ll be doing my first graphic novel review here in my blog and New Agents of Atlas is the perfect fit for this! This also a major tick off for my Year of the Asian Reading Challenge; you can still join in as well!

If you haven’t gathered by now, this issue is set before and after the War of the Realms and while there are a lot of battles happening in this war simultaneously (i.e. outer space, other dimensions, battle at New York, etc.) this one highlighted the Asian heroes defending their own home turfs!

Finally a Filipino representation in Marvel!

There are new faces and old faces but what makes this so compelling is how we FINALLY get to see representation for Asians. For my part, I was very giddy when I found out that there was a Filipino Marvel superhero! It’s not every day that you get yourself represented in an international graphic novel. (Well, unless you’re white that is) I also love how unabashed the first issue is with a not-so-subtle-nod to the current conflict within the Philippines and China.

A diverse Asian cast with funny references to each one’s culture.

There are certain parts where we get to see the Asian superheroes gather together and bicker on FOOD. Yes, food and it’s such a funny and irrelevant part but it also reinforced the unique cultural traits of each Asian subgroup. There’s also an iconic scene with SPAM and it really cracked me up because I never thought that this was a recurring thing between Asian families.

We get to see a KPop sensation as a superhero as well here! There’s a LOT of introduction and at some point, I just can’t help but glow with all the love I feel having to see these superheroes. To punctuate the full “Asian-ness” of this graphic novel, the graphic design team is mostly Asians as well. HMMMYAZ.

I salute this graphic novel for introducing an all Asian cast and I was definitely smitten. However, when I settle the Asian filter and looked closely at the storyline, it was pretty much all over the place. Partly because there was too much introduction of new characters and partly because of the urgency in the plot. If this was a little fleshed out more and have taken time to at least establish concrete relationship dynamics, I would have given it a 5-star rating. Maybe it’s understandable because the war was such a sudden drop that it made little room for further exploration, so there’s that.

All in all, this was a fun read for me mainly because of the representation but storywise this was just okay-ish for me. STILL HIGHLY RECOMMENDED THOUGH and I hope people will give this a chance so that we get to see better fleshed out Asian superheroes in the future!